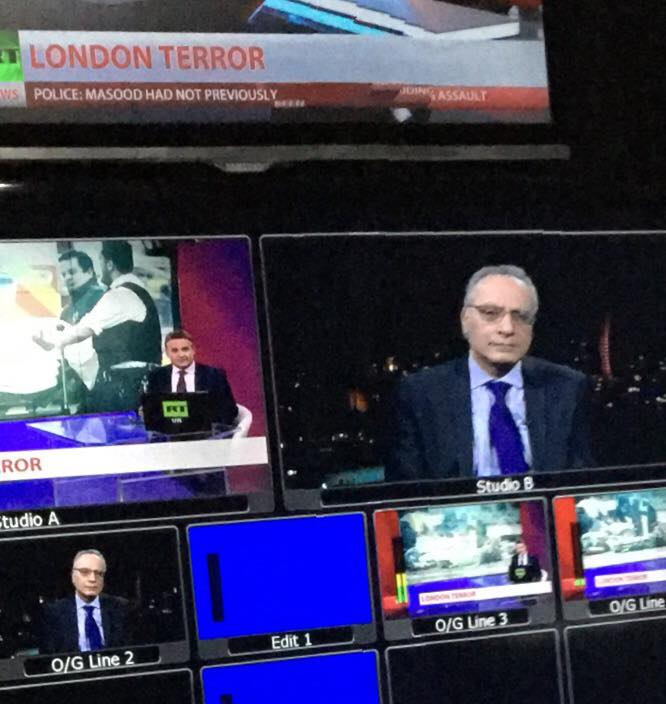 “I condemn this evil and heinous attack. My thoughts and prayers are with those who were killed, injured and their loved ones. This is a tragic and senseless loss of life of people from at least 12 countries. The perpetrator is a criminal and terrorist. We have to tackle this perverted and twisted ideology. Such attacks raise broad issues concerning core areas of Islamic teaching at homes, mosques and schools. The liberal Muslim elite should take the Muslim debate further without fear. They are the only hope of effecting reformation to enforce equality of people within Islam and with other religions or non believers. I commend Foreign Minister Tobias Ellwood MP for his bravery in attempting to save the life of PC Keith Palmer.”

London attack: What we know so far

At 14:40 GMT on Wednesday 22 March, a man identified by police as Khalid Masood drove a car that he had hired from a depot in Birmingham over Westminster Bridge, near the Houses of Parliament.

One witness said he sped up, mounted the pavement, and began hitting pedestrians indiscriminately.

Two people, Aysha Frade, a British national, and US tourist Kurt Cochran, were killed and dozens more were injured. A 75-year-old man, Leslie Rhodes from Clapham in south London, died from his injuries the next day.

Khalid Masood, 52, was born in Kent on Christmas Day 1964. Before Wednesday’s attack he is believed to have been living in the West Midlands.

He was entered onto the birth registry in the Dartford district of Kent as Adrian Russell Elms, in the weeks after his birth.

However, two years later his mother married a man with the name Ajao and, as a child, Masood was known as Adrian Russell Ajao. He later used both Ajao and Elms until he converted to Islam and became Masood.

He had a criminal past but his most recent conviction, for possessing a knife, was back in December 2003 and he had never been convicted of a terrorism offence.

Masood spent a number of years working in Saudi Arabia teaching English as a second language at the General Authority of Civil Aviation in the port city of Jeddah, the BBC understands.

Masood, who stayed in a hotel in Brighton on the night before the attack, gave his occupation as “teacher” when hiring the car with which he carried out the attack.

The Department for Education said it had no record of him having worked as a qualified teacher in English state schools.

He is believed to have had at least three children.

Prime Minister Theresa May told MPs that while Masood had been “once investigated in relation to concerns about violent extremism” he was a “peripheral figure” and “not part of the current intelligence picture”.

Who were the victims?

The police officer who died was PC Keith Palmer, 48, of the parliamentary and diplomatic protection command. He had 15 years’ service, was married and had a five-year-old daughter. He had served in the Royal Artillery before joining the police.

Aysha Frade, who worked in administration at DLD College London, was killed after being hit by the attacker’s car before it reached Parliament.

It is thought she was 43 and a married mother of two young daughters.

A third victim was Kurt Cochran, from Utah, who was in London to celebrate his 25th wedding anniversary. His wife Melissa was seriously injured.

Leslie Rhodes, a retired window cleaner, had been receiving medical treatment in hospital following the attack. His life support was withdrawn on Thursday evening.

What we know about the victims

Who are the injured?

At least 50 people from at least 12 countries were injured in the attack, 31 of whom needed hospital treatment.

Two people remain in a critical condition and one of them has life-threatening injuries, according to police.

Among those injured were three police officers who had been walking across Westminster Bridge on their way back from a commendation ceremony.

One of the two officers recovering in hospital has been named as PC Kristofer Aves. He is one of two described as having “very significant” injuries.

Acting Deputy Commissioner Mark Rowley said the victims represented “a real cross-section of ages”. Among them, according to the prime minister, were:

The Romanian couple are Andreea Cristea and Andrei Burnaz.

The Romanian embassy in London has confirmed that Ms Cristea was the woman who was seen falling from Westminster Bridge into the Thames during the attack, suffering multiple injuries.

Among others injured were four university students from Edge Hill University, in Ormskirk, Lancashire.