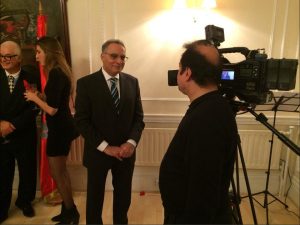 Dr. Wafik Moustafa, Chairman of the British Arab Network,  attended a wonderful reception at the Tunisian to celebrate the Tunisian Nobel Peace Price. The event was hosted by the Tunisian Ambassador to London, His Exellency Mr. Nabil Ammar and attended by ambassadors, members of parliament from both countries, journalists, business people and Tunisians from the UK. Dr. Moustafa was interviewed at the event by Tunisian TV and he said he was honoured to attend and speak about the unique position of Tunisia in the Arab Spring and its great achievement in being awarded the Nobel peace prize