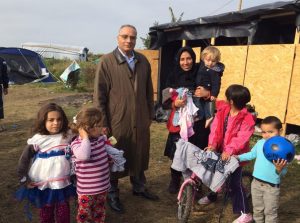 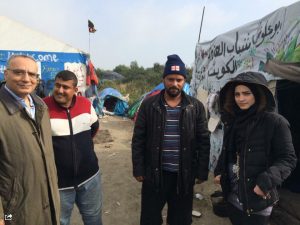 Dr. Wafik Mousatafa, Chairman of the British Arab Network, this week, visited the Calais refugee camp under the auspices of an NGO.

“I have come here to see for myself the plight of these refugees and to assess the way forward. Obviously there cannot be unlimited or illegal immigration to the UK.  Britain has a long and proud history of standing up for human rights and I have no doubt our country will do its fair share to protect those in need.”

Why is there a crisis in Calais?

Attempts by migrants to cross the Channel from France into England continue unabated, causing delays and disruption to train services.

In the latest incursion, 100 migrants broke through a fence and entered the Eurotunnel terminal, with some making it into the tunnel itself.

In the same week, a man died near the tunnel entrance in Calais – the 13th migrant to die trying to reach the UK since late June.

But many migrants are undeterred, although the numbers trying to get across the Channel have fallen – in July, some 2,000 migrants a night were trying to get into the terminal, compared to 150 in August.

The migrants, who are living in camps known as “the Jungle” on the edge of Calais, attempt to stow away on lorries headed for Eurotunnel, or jump or cut security fences to try to hide on Eurotunnel trains themselves. They also try to board lorries bound for cross-Channel ferries.

Extra security, including fencing, paid for by the UK, has been put in place.

In August, the UK and France signed an agreement on new measures to help alleviate the crisis, including a new command centre to help tackle the trafficking gangs.

How long has it been going on?

While the scenes of thousands of migrants storming the tunnel over the summer were unprecedented, the issue is far from new. In 1999, the controversial Sangatte refugee camp was opened in Calais, attracting thousands of would-be asylum seekers and people traffickers.

Its closure in 2001 and 2002 – on the orders of France’s then minister of the interior, Nicolas Sarkozy – led to riots. Since then migrants have continued to arrive in Calais and build makeshift camps near the port. French authorities estimate there are about 3,000 people currently living in “the Jungle”, although other estimates put the number higher.

The issue made headlines again in September last year after a ferry bound for the UK was stormed by about 235 illegal migrants.