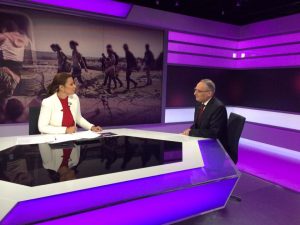 Dr. Wafik Moustafa, Chairman of the British Arab Network, has called for a comprehensive regulation and resources from European Governments to the refugee crisis in an interview on Al Arabi TV.

“It was absolutely heartbreaking to see the photo of the 3 year old Syrian boy lying dead. European Governments’ must now respond with comprehensive regulations and resources the refugee crisis in Europe. Britain is a compassionate country with a long history of welcoming refugees and must now play its part. The criminal human trafficking gangs must be brought to justice. The crisis in Syria must be resolved through a political solution.”