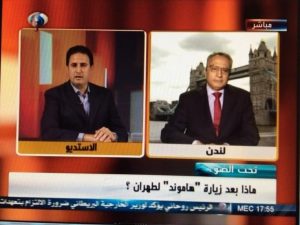 Dr. Wafik Moustafa, Chairman of the British Arab Network, has welcomed the resumption of diplomatic relations with Iran, in an interview with Al Alam TV.

Dr. Moustafa said: “I welcome the resumption of diplomatic relations between the U.K. and Iran and the re-opening of embassies. Of course the U.K. and Iran have major differences and trust needs to be built. However engagement and talking is the best approach. This is why the UK. Foreign Secretary’s visit to Tehran is an important step in going forward.

The Iran Nuclear deal and the resumption of diplomatic relations has the potential to help bring greater stability and security to the region. I believe the deal is not a threat to the Gulf states or Israel as it limits Iran’s nuclear capability. If Iran cheats then sanctions will be re-applied to it. This deal is a pragmatic step for the Middle East. I believe that over the next decade the Iranian outlook will change due to the empowerment of  young secular Iranians who want democracy, modernity, and prosperity.”

The British embassy in Iran has reopened, nearly four years after it was closed.

Foreign Secretary Philip Hammond attended a ceremony in Tehran with Iranian diplomats to mark the reopening while Iran has also reopened its embassy in London.

The UK embassy was closed in 2011 after it was stormed by protesters during a demonstration against sanctions.

Mr Hammond is the first UK foreign secretary to visit Iran since 2003.

The reopening comes weeks after Iran reached a deal with six world powers aimed at curbing its nuclear programme.

At the ceremony Mr Hammond said the attack in 2011 had been “a low point” but since the election of President Hassan Rouhani things had “steadily improved, step by step”.

He said: “Last month’s historic nuclear agreement was another milestone, and showed the power of diplomacy, conducted in an atmosphere of mutual respect, to solve shared challenges.

“Re-opening the embassy is the logical next step. To build confidence and trust between two great nations.

“Iran is, and will remain, an important country in a strategically important but volatile region. Maintaining dialogue around the world, even under difficult conditions, is critical.”

Earlier Mr Hammond told the BBC there was a “big deficit of trust” with Iran, and “major issues on which we have fundamental differences of view”.

Initially, the embassy will be headed by a charge d’affaires, Ajay Sharma, but Mr Hammond said an agreement on upgrading to full ambassador status is expected to be reached in the coming months.

“But the symbolic importance of deciding to reopen embassies in each other’s countries, is that we have chosen to talk to each other about those differences… to look for areas where our interests do align,” he said.