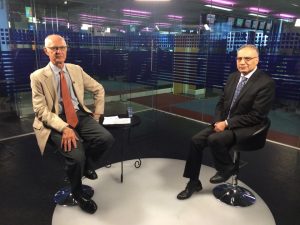 Dr. Wafik Moustafa, Chairman of the British Arab Network, has been interviewed about the Suez Canal expansion on Islam Channel.

‘I welcome the expansion of the Suez Canal if it really is going to make a positive difference to the Egypt’s economy and the lives of its people. However you have to ask whether the projected revenues are accurate in light  of the fact that before the Canal was expanded it operated at only 55% of its capacity  and that world trade has not been growing at the speed to deliver so much more freight traffic that such returns would be made. Did the Suez Canal lack capacity? Surely the £5.3bn spent on the expansion could have been better spent on education and health, where it is much needed.”

Egypt has opened a major expansion of the Suez Canal, which deepens the main waterway and provides ships with a 35km (22 mile) channel parallel to it.

At the inauguration, Egyptian President Abdel Fattah al-Sisi welcomed foreign leaders aboard a historic yacht as helicopters and fighter jets flew by.

The expansion aims to increase the traffic handled by the canal.

Egypt’s government hopes the revenues will revive the economy – but analysts have questioned the projections.

They point out that the volume of world trade has not been growing at the pace needed to deliver the sums Egypt hopes to collect.

Egyptians commenting to the international press and on Twitter appear divided over the project, with many asking if the $8.2bn (£5.3bn) spent on the expansion could have been better deployed on improving infrastructure and public services.

The expansion will allow for two-way traffic along part of the route, as well as for larger vessels overall. The construction of the new lane began a year ago, on the orders of Mr Sisi.

At the inauguration ceremony in the town of Ismailia, the president appeared in military uniform and sunglasses aboard the El-Mahrousa – the yacht that was the first vessel to pass through the canal when it was built in 1869.

Fighter jets and helicopters flew above the ceremony. On the streets of Cairo, banners described the expanded canal as Egypt’s “gift to the world”.

Pro-government media have hailed the expansion of the canal as a national triumph, and a turning point after years of instability.

However, many analysts doubt if the new venture will deliver the anticipated benefits.

Ahmed Kamaly, an economist with the American University in Cairo, told Reuters news agency that the Egyptian projections were “wishful thinking”.

“There was no viability study done, or known of,” he was quoted as saying. He added that the immediate benefits from the expansion were more likely to be political than economic, uniting people “around a national project”.