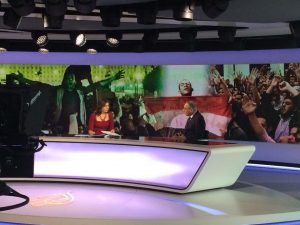 Dr. Wafik Moustafa, Chairman of the British Arab Network has condemned the terrorist attacks in Sinai, Egypt  and called on the Egyptian Government not to use new terrorism laws as a pretext to crush political opposition in an interview on Al-Jazeera English News.

“Egypt is facing a unique terrorism threat and therefore equally needs a unique and fair anti terrorism law. However such a law should not be used as a smokescreen for stifling free speech and crushing political opposition. Egypt is going through a difficult phase.  Any new counter terrorism laws must respect human rights and be implemented fairly without discrimination.

Forming a pan Arab army to fight terrorism is very difficult due to the current turmoil in the Arab world, which is not conducive to creating a unified military force. The Arab League has not been able to act in an effective way generally so it is unlikely to deliver such a force.”

Egypt has vowed to rid its Sinai Peninsula of militants after major clashes with Islamic State fighters there killed more than 100 people.

Operations will not stop until the area is cleared of all “terrorist concentrations”, the army said.

Air strikes continued into the early hours of Thursday.

The army says 17 soldiers were among those killed after militants launched near-simultaneous raids on military checkpoints in Sheikh Zuweid and Rafah.

The attack was one of the largest co-ordinated assaults in the area yet by Islamic State’s (IS) local affiliate, Sinai Province.

The peninsula has been under a state of emergency and a curfew since October, when dozens of soldiers were killed in a militant attack.

Separately on Wednesday, security officials said nine members of the now banned Muslim Brotherhood, including former MP Nasr al-Hafi, had been killed in a police raid on a flat in western Cairo.