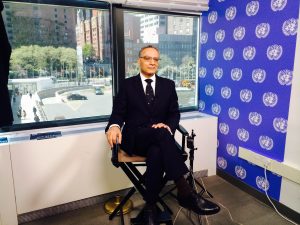 Dr. Wafik Moustafa, Chairman of the British Arab Network, has been interviewed  by world media at the United Nations Headquarters in New York about issues affecting British Arabs and the Conservative Party’s victory.  He was interviewed by France 24, El Arabi, Al Jazeera, Nile News, Moroccan TV and Radio Monte Carlo.

He  highlighted the issues that matter to the British electorate and Arab voters i.e. public services including the NHS, education, housing, transport, welfare and the economy. Dr. Moustafa stressed the need for the British Arab community to fully integrate into mainstream British Society and to participate in British politics. He welcomed a stable government being elected in the U.K. and also talked about Immigration, Islamophobia and the Syrian civil war.