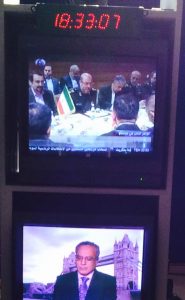 Dr. Wafik Moustafa, Chairman of the British Arab Network, has called for urgent humanitarian aid for Yemen in an interview with Al-Alam TV.

Dr. Moustafa said: “We have a serious humanitarian crisis in Yemen, where the situation on the ground is deteriorating fast. I urge the international community to provide aid to the people of Yemen who desperately need water, food and fuel.  A political solution bringing stability and security should be pursued by all parties as that is the only solution for Yemen and its people.”

The UN has launched an appeal for nearly $275m (£183m;€255m) of aid to help civilians caught up in Yemen’s worsening conflict.

About 150,000 people have been displaced by fighting, according to the UN, with 12 million short of food.

A Saudi-led coalition has been bombing Yemen’s Shia Houthi rebels, who are advancing across the country.

The coalition is bombing 18 of Yemen’s 22 provinces, exacerbating an existing humanitarian crisis.

The UN said 731 people had been killed and 2,754 injured – many of them civilians – in three weeks between March and April. The numbers were likely to be an underestimate, it warned.

The UN Office for the Co-ordination of Humanitarian Affairs (Ocha) is now calling for $273.7 million in donations.

“To scale up assistance, we urgently need additional resources. I urge donors to act now to support the people of Yemen at this time of greatest need.”