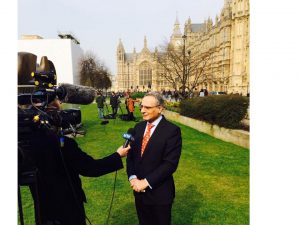 In an interview with Al-Hurra TV, Dr. Wafik Moustafa, Chairman of the British Arab Network, has said the Muslim Brotherhood are a broad body of political and ideological thought and are not a homogenous group. He was speaking after a further delay was announced by the U.K. Government to the publication of its report on the Muslim Brotherhood.

Dr. Moustafa said that the report should be published so its findings can be scrutinised by parliament, the media and the public. He added that clearly some individuals and affiliated groups in the Muslim Brotherhood may need greater scrutiny but a substantial part of its membership operate within the legitimate boundaries of the state. He called on the British Government to support and  facilitate greater dialogue and reconciliation in Arab world.

Setting out the Government’s attitude towards a powerful and influential Islamist movement, but which is shunned by much of the Arab world, was always going to be one of the trickiest challenges facing David Cameron in the Coalition’s final days.

For months, ministers had delayed publication of a review into the Muslim Brotherhood which concluded that the group was not a terrorist organisation, a finding which threatened to open a diplomatic rift with Saudi Arabia.

But the waiting had finally seemed to be over when Downing Street pencilled in for the release of the report and the Government’s response to it. Officials spent the weekend preparing to smooth any foreign feathers ruffled by the finding that the Brotherhood was a legitimate movement which should not be proscribed.

Their work turned out to have been wasted as Downing Street changed its mind hours before the report was due to be published and announced a further delay. It explained that it had always planned to release the document at the same time as new plans for combating extremism which were still being discussed.