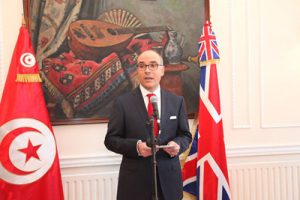 Dr. Wafik Moustafa, Chairman of the British Arab Network, has congratulated His Excellency Nabil Ammar, Ambassador of Tunisia, on Tunisian National day at an official reception held at the embassy in London.

The reception was attended by British Parliamentarians, Ambassadors, officials, business people, journalists and friends of Tunisia who showed solidarity and support for Tunisia after the terrorist attack on the Bardo musuem in Tunis. In his speech Ambassador Ambassador Nabil Ammar, stressed the necessity of tackling the root causes of terrorism and invited friends and partners to continue visiting and investing in the country. A minute of silence was observed for the victims of the attack during the ceremony.

“It is a pleasure to to attend the celebrations on this important day for Tunisia’s people and Government. I congratulate His Excellency Nabil Ammar, his Government and the Tunisian people. I condemn the terrorist attack on the Bardo musuem and  my thoughts and prayers are with the families of those who were injured and killed. We stand shoulder to shoulder with the Tunisian people in their fight against extremism and terrorism. The United Kingdom and Tunisia have strong ties, and the British Arab Network will continue to work to maintain and enhance them.”

Warm welcome and thank you for your presence, on the occasion of this very special and historical commemoration of our National Day. The first to be celebrated under the 2nd Tunisian Republic.

This new born Republic is another great achievement of the Tunisian People. In line with it’s strong and continuous desire, to live in dignity, in an independent, peaceful, free, democratic and open country.

This has been possible, thanks to all the Tunisian women and men, that have given or dedicated their lives or struggle, for us to remain always proud, of Tunisia’s journey among other nations. I’d like to pay tribute to their memories on this occasion.

They are close to our hearts. As close as are all the innocent friends of Tunisia, among them, Sally Adey, a British mother of two, coming from abroad peacefully to visit the country, and killed in an operation, one cannot qualify, that targeted two days ago only, the heart of one of Tunisia’s most prominent political, historical and cultural symbols, the Bardo Museum.

I here express my deepest condolences to all their families and friends, and to representatives of their good and friendly countries here present. I now ask for one minute of silence to be dedicated to them.

Let me save your time by not elaborating on the horror of terror attacks, but rather stress that those will continue and increase, as long as we do not show and practise much more international solidarity and cooperation at all levels, and then concentrate seriously, putting aside double standards and double languages practises, on how to dismantle all the components of the machine producing terror. From the young vulnerable and desperate people at the end of the chain, to those who select and recruit them and wash their brains, train and arm them, to those who finance and planify the whole system, to the partners of those, as well as to those who by their strategies, plans and decisions contribute to create the conditions of chaos, where terror can prosper and grow.

Terror attacks are always very painful indeed. But I have to recall that it is the very land of Tunisia that gave birth to the famous poet Abou Kacem Chebbi who wrote: “If the People one day wanted life, Then destiny will have to obey”

Another way to say that Tunisians have all the capacity to defeat those who harm them and to continue their route in building a prosperous and democratic country. They have proven it during centuries. Their soft power comes from their openness for ages and their capacity to integrate the best from all the different cultures and civilisations that lived on that land.

The assistance to Tunisia should be at least at the level of what its People is paying for what is decided and happening out of its borders. The country has the strong feeling that it is fully playing its part of the job. Partners should show the same level of solidarity shown elsewhere for the same type of attacks. A short but very important article has been published this morning in the press under the title: “West has an obligation to the people of Tunisia” I am not the author.

During the 4 years Transitional period in Tunisia, the UK Government has been and continues to be, very supportive. I thank the British Government and so many members of the British civil society, for their commitment to strengthen our already excellent bilateral relations.

Fortunately, those relations enjoy today, and I am happy to say that, a much more conducive and favourable bilateral climate, that will certainly allow them to further develop and diversify.

Thank you again for your solidarity and sympathy. Continue to come and visit us. Continue to reinforce the bridges between us. Continue to promote new investments, new ideas and prosperity with us. This is the way to fight destruction successfully.