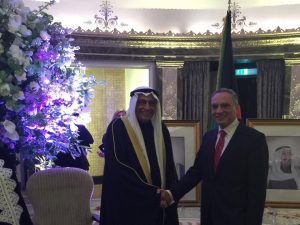 Dr. Wafik Moustafa, Chairman of the British Arab Network, has congratulated His Excellency Khaled Al-Duwaisan, Dean of the Diplomatic Corps and Ambassador of Kuwait, on Kuwait National day at the official celebrations at the Dorchester Hotel in London.

It’s the 54th National Day since the day in 1961 when the small Gulf state gained its independence from the British Empire, of which it had been a protectorate since 1899.

“It is a pleasure to to attend the celebrations on this important and joyous day for Kuwait’s people and Government. I congratulate His Excellency Khaled Al-Duwaisan and his team and am delighted to celebrate with them and all the guests here today. The United Kingdom and Kuwait have deep and historic ties, and the British Arab Network will continue to work to maintain and enhance them.”