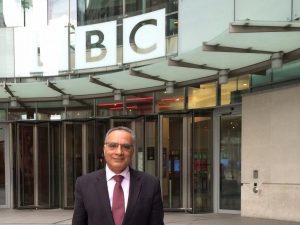 Prime Minister David Cameron has defended the right to “cause offence about someone’s religion” in a free society.

It follows comments made by Pope Francis, who said that people’s faiths should not be insulted or ridiculed.

Speaking on US network CBS, he said that, as a Christian, he would be offended by the mocking of Jesus, but he didn’t have the right to “wreak vengeance” on them.

In an interview on the BBC Radio Arabic’s Al-Zahira news programme (mid day news review), Dr. Wafik Moustafa, Chairman of the British Arab Network said:                   I agree with Prime Minister David Cameron that there is a right to offend as long as it is within the law. Freedom of Speech is a central and cherished value in a free society. When people offend us we must not respond by breaking the law. We have the freedom of speech to respond.