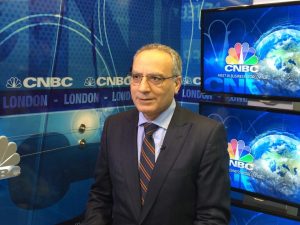 Britain is to establish its first permanent military base in the Middle East since it formally withdrew from the region in 1971. The base, at the Mina Salman Port in Bahrain, will host ships including destroyers and aircraft carriers. Bahrain will pay most of the £15m  needed to build the base, with the British paying ongoing costs.

In an interview about the base on CNBC Arabic TV, Dr. Wafik Moustafa, Chairman of the British Arabic Network, welcomed  the return of the British Navy to the East of Suez. He said it was a pragmatic necessity, which will help bring stability and security to a turbulent region and safeguard British strategic interests. It is welcomed and supported by the government of Bahrain.

Dr. Moustafa said that there have been military facilities serving major powers such as the U.S. and U.K. for many years under various arrangements in the region. He said Britain, the U.S. and France are playing a special role in degrading and destroying ISIL, which is a regional and global security threat. In reality there is a vacuum in the Middle East, for example, previously it was the resolve of US led coalition that dislodged Saddam Hussain from Kuwait as the Arab League was not capable of resolving the crisis at the time.