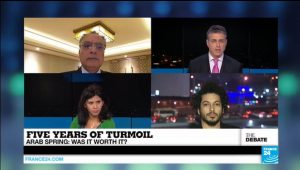 Dr. Wafik Moustafa, Chairman of the British Arab Network, was interviewed on the fifth anniversary of the Arab Spring on ‘The Debate’ programme on France 24.

Dr. Moustafa said that the people in the Arab countries which had revolutions, with the exception of Tunisia, are now facing chaos and tyranny. He said he was disappointed that the people had not got the dignity and freedom they so badly wanted and hoped that the situation would improve soon.

Five years of turmoil: Was the Arab Spring worth it? (part 2)

It’s been five years. Tunisia’s Ben Ali forced to flee; Egypt’s Mubarak would follow three weeks later. But civil war has supplanted the Arab Spring in Libya, Syria and Yemen, a coup in Egypt has brought back the old guard, and old Sunni-Shia divides are in the headlines with the Saudi-Iranian standoff. As authorities scramble in Indonesia after suicide bombings, did a popular movement by the younger generation in the Arab world lead to ISIS striking in places like Paris, Istanbul and Jakarta?

President, Think Ahead for the Med Tunisia