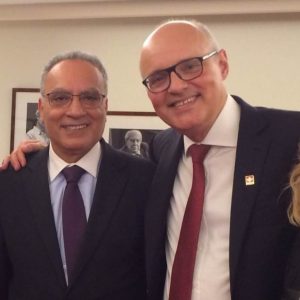 “I was delighted and honoured to attend such a wonderful event. I would like to congratulate His Excellency Mr. Dominik Furgler on his award concert, which gives a great platform to talented musicians”.

About the Awards concerts

The Swiss Ambassador’s Award is an accolade given to one talented Swiss-based classical musician or group of musicians every year. The aim is to provide them with an international and highly respected platform (including the world-renowned Wigmore Hall in London) to perform their music, thus helping them on their professional career path. This Award was originally founded in 1998 with just one concert at Wigmore Hall, London. In the meantime it has expanded to include concerts in Manchester, Edinburgh and Cardiff (2008 and 2009) and Belfast in 2013.