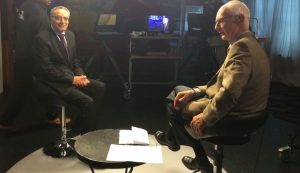 Dr. Wafik Moustafa, Chairman of the British Arab Network, was interviewed on the Islam Channel about the sentencing to death of Saif Gaddafi by a Libyan court this week.

“It is a fact that the regime of Colonel Gaddafi was tyrannical, violent and inhumane and  Saif Gaddafi must be held to account for his actions as part of that regime. However his death death sentence was passed in absentia and by a court whos competence and fairness is questionable. Libyan courts do not meet the international standards for the administration of justice. Therefore I believe that Saif Gaddafi should be handed over to the international Criminal Court at the Hague, where he is wanted  for  war crimes and crimes against humanity, and where he would receive a fair trial.”

A court in Libya has sentenced Saif al-Islam Gaddafi, son of deposed leader Col Muammar Gaddafi, and eight others to death over war crimes linked to the 2011 revolution.

More than 30 close associates of Col Gaddafi were tried for suppressing peaceful protests during the uprising.

Saif al-Islam was not in court, but has previously appeared via video link.

He is being held by a former rebel group from the town of Zintan that refuses to hand him over.

A Zintani source indicated to the BBC that they would not execute him or hand him over to the court.

‘Until the bitter end’

Former head of intelligence for the Gaddafi regime, Abdullah al-Senussi, is among those also facing death by firing squad, as is former PM Baghdadi al-Mahmoudi.

They have the right to appeal against their sentences within 60 days.