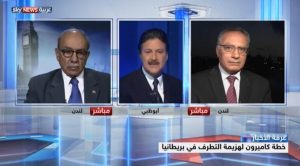 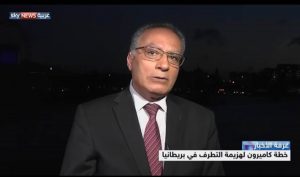 “I welcome Prime Minister David Cameron’s new five-year strategy to combat extremism and commend him for attempting to implement a much needed comprehensive strategy. It is absolutely necessary to confront  the perverted and twisted ideology that extremists propogate through an effective counter narrative. Hate preachers who brainwash young people must be taken to task. It is right to seek to embolden the Muslim community and improve integration. The British Arab Network is ready to play its role as a civil society organisation in helping to combat extremism.”

An ideology that at its furthest end seeks to destroy nation states to invent its own barbaric realm. That – in the words of the prime minister, David Cameron – is what defines Islamist extremism.

Defeating extremism is the “struggle of our generation”, Cameron said on Monday, as he outlined four pillars of a five-year strategy in tackling the “subversive” doctrine.

Here is a breakdown of the counter-extremism strategy:

Cameron trumpeted Britain’s liberal values as the “strongest weapon” for combating Islamist extremism but also said more must be done to deglamorise the cause, especially Islamic State.

The prime minister said the government would work with people who understand what life is like under Isis to explain to young and vulnerable people the brutal reality of its ideology.

Syrian, Iraqi and Kurdish communities will be given platforms from which to speak out against the carnage Isis is conducting in their countries, he said.

The prime minister also set his sights on internet companies, hitting out at firms for doing too little to tackle extremism online.

“When it comes to doing what’s right in the fight against terrorism, we too often hear that it’s all too difficult.

Tackle the violent and non-violent

The prime minister said the new strategy would take steps to confront groups and organisations that might not advocate violence but do promote extremism.

The media watchdog, Ofcom, would also be strengthened to give it powers to take action against foreign channels that broadcast hate preachers, he said.

The prime minister said he would bring forward further measures to guard against the radicalisation of children in some so-called supplementary schools or tuition centres.

Cameron also lamented the lack of progress in dealing with the so-called Trojan horse scandal, which saw allegations of infiltration by religious extremists in Birmingham schools.

“It has taken too long to take action against the governors and teachers involved in the scandal and to support the schools affected to turn themselves around.

In one of his headline announcements, he unveiled a new scheme to enable parents to apply directly to get their child’s passport cancelled to prevent travel. This comes in the face of a number of high-profile cases in which young men and women have fled to Syria to join Isis.

The prime minister pledged to actively encourage reforming and moderate Muslim voices to speak up and provide a platform.

“If you’re interested in reform, if you want to challenge the extremists in your midst, if you want to build an alternative narrative, if you just want to help protect your kids, we are with you and we will back you – with practical help, funding, campaigns, protection and political representation.

Cameron said he would set up a new community engagement forum to hear directly from Muslim groups who are challenging extremism.

He also took a moment to “challenge” British broadcasters to reconsider giving airtime to extremists. The BBC has been criticised in the past for inviting radical cleric Anjem Choudary on its programmes.

The prime minister said more needed to be done to improve integration and move away from segregation in schools and communities.

“I’m not talking about uprooting people from their homes or schools and forcing integration but I am talking about taking a fresh look at the sort of shared future we want for our young people.

Cameron revealed that Louise Casey, who heads the government’s troubled families unit, will carry out a review of how to boost opportunity and integration in ethnic minority communities.

“She will look at issues like how we can ensure people learn English, how we boost employment outcomes, especially for women, and how state agencies can work with these communities to properly promote integration and opportunity whilst learning lessons from past mistakes – when funding was simply handed over to self-appointed ‘community leaders’ who sometimes used it in a divisive way.

Casey will provide an interim report early next year.