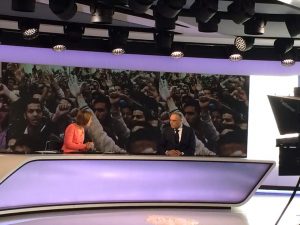 Dr. Wafik Moustafa, Chairman of the British Arab Network has condemned the terrorist attacks in Sinai, Egypt in an interview on Al-Jazeera English News.

“I condemn the terrorist attacks and loss of life in Sinai, Egypt. My heart goes out to the families of the soldiers and civilians who were killed or injured. Egypt has a large population and is in dire need of political and economic stability. The current turbulence needs to be addressed through a genuine drive for democracy and accountability by having a free parliament, rule of law and respect for human rights.

Communities such as those in Sinai must not be marginalised as it is counterproductive because it leads to greater polarisation and instablility. An environment to build trust and confidence between Egypt’s Government and citizens is much needed. Also the government needs to be transparent as Egyptian and Foreign journalists are not allowed to cover such atrocities first hand.”

Clashes between Islamic State (IS) militants and the army in Egypt’s Sinai Peninsula have left more than 100 dead, the military has said.

It said 17 soldiers, including four officers, and more than 100 militants were killed.

Near-simultaneous raids were launched on at least five military checkpoints and a police station in and around Sheikh Zuweid on Wednesday morning.

The attack was one of the largest co-ordinated assaults yet by IS in Sinai.

Jihadists based in the restive region stepped up their attacks after the military overthrew Islamist President Mohammed Morsi in July 2013. At least 600 police and armed forces personnel have since been killed.