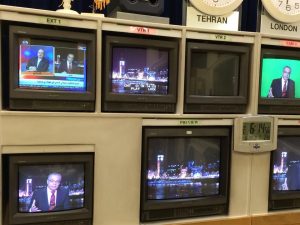 In a wide ranging interview on the Syrian crisis on Al Alam TV, Dr. Wafik Moustafa, Chairman of the British Arab Network, has called for an end to the violence and for a political resolution to the conflict. Others participants on the panel were Dr. Mahdi Dakhlalia, former Syria Minister of Information and Media, and Mr. Hadi, a political analyst from Iran.

Dr. Moustafa stated that Syria is torn apart and fragmenting. It’s condition resembles the 1517 pre Ottoman conquest stage and therefore the international community must act immediately. Dr. Moustafa welcomed the UN Syria Envoy’s initiative for “freeze zones” to halt fighting and improve aid. However he said a that to achieve a ceasefire and a political solution all of the parties to the Syrian conflict – proxies and backers must be brought to the table by the UN for dialogue and negotiations. That is the only way forward.

Refugees in the region

Around 190,000 people have been killed and 10.8 million people are in urgent need of humanitarian assistance inside Syria

More than 10 million Syrians, or 45 per cent of the country’s population has been displaced

Of those, 6.5 million are displaced within Syria and approximately 4 million have sought refuge in other countries.